I am often asked, through networks of professionals, to connect a reporter or media representative to breastfeeding mothers in a particular situation.  There are some requests that I scramble to satisfy, without reservation, because either the journalist is one whose work I am familiar with (and is truly supportive of breastfeeding), or because the population they are looking for is one that can benefit from exposure.  I’m all for raising awareness and bringing less-known breastfeeding topics into the cultural mainstream.

This week, however, a request began circulating that didn’t really pass my “sniff test.”  A newsmagazine-type TV show here in the United States put out a call for help with a story about breastfeeding, which would include information about New York City’s initiative to halt formula marketing on hospital mother-baby wards.  They sought mothers who have used or who have considered using pharmaceuticals, off-label (for a purpose other than what it was approved to treat), to stimulate milk production.  The title of the piece, along the lines of “Breastfeeding – Are We Going to Extremes?” got my antennae up immediately, and had the same effect on some of my colleagues.  The very title of this blog, normal, like breathing, speaks to this frustration, as I commented here … are we “extreme” when we get a cast to re-set a broken bone?  Is a kidney transplant “extreme” when someone’s kidneys don’t work?  Is an inhaler “extreme” when a person can’t breathe otherwise?  Why is a mother who takes measures to approximate, as closely as possible for her, the normal, physiological process of breastfeeding relegated into the “extreme” pile?

There are two populations who offer prime subjects for this request: adoptive mothers who wish to induce lactation and offer feedings at the breast, and mothers with chronic low milk production, such as those with hypoplasia/insufficient glandular tissue.  Given that I work closely with the latter population (which comprises a relatively small percentage of breastfeeding mothers), I was in a position to “recruit” mothers for this media piece.  My first concern was for the protection of these mothers.  One drug, called Domperidone (Motillium) was originally developed as an antiemetic/anti-nausea drug, but a side effect is … lactation! Domperidone works as a dopamine antagonist, and like for most endocrinological processes, blocking the action of a neurotransmitter sets off a domino effect – in this case, the result is sustained, increased levels of prolactin.  It seems easy enough:  some mothers need a little help making enough milk for their babies, Domperidone offers that help.  But!  Domperidone is not approved for sale or use in the United States and is currently under “orphan drug status” while researchers study how it works to support lactation, whether long-term use is without risk, and whether the high doses used to induce or support lactation are, indeed, safe for mothers and babies.  I did not feel comfortable sending a mother who is currently using Domperidone into the hands of a reporter who is attempting to determine whether she is “going to extremes.” A few of my colleagues and I were comfortable offering lots of expert voices, though – esteemed members of our field who could provide the facts about off-label pharmaceutical use for lactation support.  The producers were also directed to the Academy of Breastfeeding Medicine’s protocol on the use of galactagogues, which clearly states that these are last-resort measures to be called upon after all other possible causes for low milk production (breastfeeding management, anatomical issues in baby that preclude milk transfer, hormonal issues in mother that preclude milk production) are ruled out.  It is also important to recognize that IBCLCs cannot and do not act in a prescribing capacity, unless they are otherwise licensed or credentialed (MD, DO, RN, CNM, FNP, etc.) to do so.  While an IBCLC might provide information about Domperidone and other evidence-based measures of augmenting milk production to a mother who might benefit from them, she is NOT “prescribing” anything.

The producers of this show didn’t seem too interested in getting the facts, though.  One mother, who had successfully used Domperidone earlier in her breastfeeding (with insufficient glandular tissue) journey, felt safe sharing her experience. She spoke with a representative from the show and was told “we really want someone who is using it right now.” Hmm.  Another (media-savvy) mother shared her balanced, not-particularly-extreme experience of using Domperidone to support her breastfeeding experience, and was dismissed – asked instead, “Do you know anyone who has had a bad experience with it?”  Hmm again.  We offered to find a mother in Canada who is using Domperidone (there are no regulatory concerns in Canada or many other countries; Domperidone is prescribed by appropriately-licensed healthcare providers and used by mothers for lactation support), but the interest is in mothers in the United States.  You know, the ones who are “going to extremes to breastfeed.” 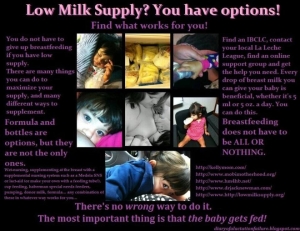 Our collective radar piqued, we were especially interested in a blog post at the website “Moms Feeding Freedom” (punctuation theirs) that was published yesterday (August 13), because it contained many of the elements that were being proposed for this newsmagazine program’s piece. It is interesting to note, on the blog’s “about us” page, this statement: “MomsFeedingFreedom.com was made possible by a grant from the International Formula Council.” Needless to say, the blog post cites a “troubling trend” and describes mothers going to “extreme lengths” in order to breastfeed.  Hmm.

It is pretty obvious to me that this newsmagazine is NOT seeking to present a balanced look at mothers who work incredibly hard to provide human milk to their babies, rather, it is seeking to produce, in made-for-TV form, a sensationalized, flame-fanning piece that echoes the blog post on “Moms Feeding Freedom”.

Some of these mothers turn to herbal and pharmacological galactagogues to boost their own milk production, others need to supplement so their babies can grow.  What goes in the supplementer?  Well, there are some who think that’s an issue of “extremes,” too, but fortunately, the cultural opposition to human milk for human babies, either milk collected by milk banks and dispensed by prescription to babies in need, or milk acquired by mother-to-mother milk sharing, is dwindling fast.  Of course, there are mothers who, upon learning their own bodies won’t be able to completely nourish their babies, choose to supplement whatever breastfeeding they can do with artificial baby milk – and there are others who decide they just plain don’t want to or can’t breastfeed at all, so they switch immediately to bottle-feeding without looking back.  These mothers aren’t any less loving, intelligent, or devoted to their babies than the ones who do seek to make breastfeeding work.  The very existence of mothers who prioritize breastfeeding as part of their mothering experience does not lessen or cheapen the choice of mothers who opt not to. 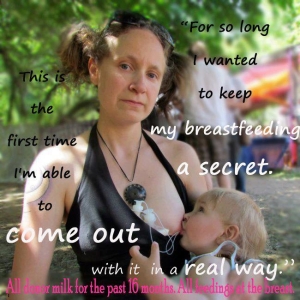 I am publishing this blog post to raise awareness of the measures the media (perhaps funded by WHO Code-violating sponsors?) will take to marginalize mothers who go the extra mile to breastfeed their babies.  These mothers have, frankly, been through enough upon discovery that their bodies don’t do what they expected them to do; and the availability of assistance to preserve a breastfeeding relationship does not discredit mothers who choose not to take advantage of that assistance, rather, it allows for true freedom of informed choice for all mothers.  I have worked with countless mothers who did not produce all the milk their babies needed, but who valued what milk they could offer, or rejoiced in the ability to feed their babies at their breasts rather than by bottle.  These are mothers for whom breastfeeding was so much a part of what they anticipated about mothering, mothers who learned to accept their limitations and work with them to whatever capacity they wanted or could.  Mothering success is not measured in ounces – or drops – of milk that flow from breast to mouth, it’s measured in the love that flows between a mother and her baby.  For some mothers, embracing, as far as is possible, the biological norm for infant feeding and nurturing is what comes most easily – the oxytocin and prolactin bursts that accompany feeding at the breast and the triumph over obstacles that others may consider insurmountable offer more than adequate compensation to the family that goes the extra mile to breastfeed in the face of difficulties.

Shame on anyone who seeks to malign or marginalize these brave, devoted mothers.  They’re not “going to extremes,” they’re taking reasonable measures to make a normal process work.

For more images of mothers and babies who have overcome obstacles to make breastfeeding work for them, see this beautiful YouTube video by Melissa, a mother with hypoplasia/IGT.

8 thoughts on “When the media spins the biological norm”

read all about it!

This work by Diana Cassar-Uhl is licensed under a Creative Commons Attribution-NonCommercial-NoDerivs 3.0 Unported License.