Well, no, it’s not really like that.  I wasn’t sick, and the “changing” part was that the guy refused to operate on me.  At the time, I was kind of mad about it.

I was 26, and in the best shape of my life having just run my first marathon. I loved running and spent a lot of time in the gym, too.  At my well-woman check-up, the Nurse Practitioner took one look at my chest – the entire perimeter of my body where my sports bras touched me was chafed and oozing.  Shoulders, underarms, all around my ribcage were just wrecked.  Even at 125 pounds (ah, youth!), my breasts were still an ample 34DD, and I struggled with back/neck/shoulder pain, deep grooves in my shoulders, and chafing was part of my existence. 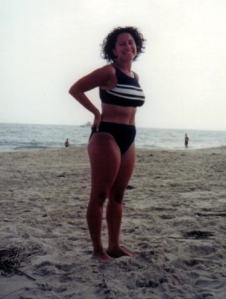 On the beach, weeks after meeting with that surgeon

“Why on earth have you not had those things reduced?” she asked me during my breast exam, obviously disgusted by the scabs and glossy, exposed skin. (I feel compelled to mention that this woman is still practicing around here, and I’m told she still says such horrific things, but at that time, I was just happy to have a civilian female as my primary care provider.)  Honestly, it hadn’t really occurred to me that I would be a candidate for a breast reduction, other than that I wished I could wear cute, sleeveless dresses or tank tops that showed off my fit arms.  Surgery hadn’t seemed feasible until then.

“Um, I don’t know?” I answered, feebly.  She put in a referral for me to see a surgeon, which immediately led to another referral to the plastic surgery clinic at Walter Reed Army Medical Center.  The year was 1999.  I was sent on medical TDY from New York to Washington, via the Delta Shuttle out of LaGuardia with a bunch of businessmen.  I don’t remember much about getting to Walter Reed from the airport, except that it was scary.  The hospital was old and tired.  I found the plastic surgery clinic and sheepishly presented myself for my appointment.

I don’t remember the doctor’s name.  I remember that he was from North Carolina, and his accent was pretty thick.  I remember that he drew with black marker on my breasts and chest, and took pictures and notes, and didn’t say a whole lot while he was doing that.   There were Xs and lines and circles and arrows all over my upper body.  I remember that I felt really weird sitting there in a medical setting, with my visions of sleeveless dresses but knowing this was more about finding a solution for my chronic shoulder pain and the awful chafing.  And I remember what he said when he finally spoke to me after his assessment.

“Have you had any babies?” he asked me.

“So you think you might have babies someday?” he went on.  Why does this matter?  Do I get my breast reduction or not?

“I don’t really know … probably.  Yeah, I hope I have babies someday.”

“Look,” he spoke quickly, but with his North Carolina twang.  “When you get pregnant, your breasts are going to go south.  They all do, from the pregnancy.  So do me a favor – have your babies, and breastfeed them if you want to.  Then, when you’re all done, and your breasts have gone south, come back and see me, and I’ll make you the envy of all your friends, because you’re actually a candidate for a breast reduction, but they won’t be.  Come back when you’re done using your breasts.”

I was shocked, and a little embarrassed.  I had only ever seen one baby breastfeeding up close, and breastfeeding was the last thing on my mind at that point in my life.  I think my disappointment showed on my face, and the surgeon spoke again.

“I’ve done 687 breast reductions in my career, and only two have been on women who weren’t done having babies yet.”  He went on to tell me about those girls – one, a teen with such severely large breasts, she needed to secure herself with duct tape just to get out to the door to school.  “She would have been an L-cup,” he told me.  I don’t remember what he said about the second case because I was lost in thought about how this guy probably changed that poor young girl’s life … for the better … but it had become clear he wasn’t planning to change mine, at least in the way I was seeking.

I left the clinic and rode the Delta Shuttle with the businessmen back to LaGuardia airport, sad to deliver the news to my friends that I wasn’t going to have a breast reduction after all, and I wouldn’t get to wear cute tops and dresses, and I’d still be sore and chafed.

Because the surgeon wanted to make sure I had the opportunity to breastfeed someday.

Now, there are women who have breast reductions and go on to breastfeed.  My friend and colleague Diana West, IBCLC wrote about them in her book Defining Your Own Success: Breastfeeding After Breast Reduction Surgery and has been educating women and healthcare providers about breastfeeding after surgery for over a decade.  I didn’t know about these women in 1999.  I didn’t really care in 1999.

She was about 4 months old here — so sweet.

In December of 2002, I gave birth to my first baby.  I had read books and prepared to breastfeed her, but it wasn’t until we had major problems doing so that my commitment to nursing Anna was solidified (yeah, I’m one of those people who likes to do things that someone tells me I can’t do, so on our 5th day in the hospital, when that nurse said “you can always just pump and bottle-feed,” it was game on and there was no flat or inverted nipple, no bilirubin of 22, no return to work, no nothing that was going to keep me from breastfeeding).  I stayed committed through 105 fever and severe mastitis on my 8th day (while my husband was gone the entire day and night playing a gig with Tommy Tune in NYC); I stayed committed through Anna’s bloody diapers and bad, bad guidance from our pediatrician; I stayed committed at 3 weeks when Anna refused to sleep for more than 45 minutes at a time, happy only when I nursed her, as I hissed to her half-sleeping daddy at 2 in the morning, “I know why people quit this.”

At some point, the dust settled.  Maybe it wasn’t even until after my second baby was born – I honestly don’t remember when it happened for me, that feeling of empowerment, of knowing that I was doing something for my baby that countless women before me had done for theirs, something only I could do for mine.  I discovered somewhere along the way that breastfeeding wasn’t only about what I fed my baby, but about how I mothered her and how she learned to relate to me.  The God-given potential of my big, unwieldy breasts – even bigger and more unwieldy now after three pregnancies and nearly a decade of lactation had been fulfilled. 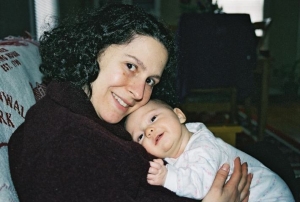 She was always happy there … I was home base.

I don’t know the name of that North Carolina plastic surgeon who worked at Walter Reed Army Medical Center in the summer of 1999, but there isn’t a single day that I don’t think about him with a thankful heart.  The experience of breastfeeding has been a life-defining one for me, leading, of course, to my becoming a La Leche League Leader, an IBCLC, and now working toward a Master’s Degree in Public Health.  I aspire to study epidemiology next, and to spend the rest of my working life conducting and publishing research about breastfeeding, with the hope that my life’s work can enable more mothers to be empowered by their experience of breastfeeding.  If you had told me in 1999 that breastfeeding, mothering, epidemiology – any of this – would be my sweet spot, my calling, I would have laughed at you.

Would I have breastfed my own children after reduction surgery?  Possibly, but given the woefully substandard breastfeeding support where I received my medical care and the fact that no women in my family had positive breastfeeding stories to share, I don’t know what lengths I might have gone to in order to make it work if the obstacles had been any bigger than the ones I faced.

Today, I am 39, with a strong enough history of breast cancer to spur some healthcare providers to talk to me about a prophylactic double-mastectomy and breast reconstruction.  If determined beneficial by genetic tests for BRCA1 and BRCA2, I could, perhaps, be a candidate for a surgery that could prevent cancer and give me the chance to go sleeveless at long last.  Now, though, I’m ambivalent.  I struggle with whether I could really part with this assemblage of glandular and fatty tissue that has played such a significant role in the lives of my children and me.  What if I ever needed to lactate for a grandbaby — or if one of my children grew up and got sick, and I could help by re-lactating and providing human milk again?  Such considerations don’t occur to most people, for whom breastfeeding is a small part of their history, but for me, they are huge.

My answers will come, or perhaps the big decisions will be made outside of my control — like the 1999 decision of an Army plastic surgeon that changed my life.

20 thoughts on “The surgeon who changed my life”

read all about it!

This work by Diana Cassar-Uhl is licensed under a Creative Commons Attribution-NonCommercial-NoDerivs 3.0 Unported License.